Exclusive analysis of physical data from the Women's EHF EURO 2022 referees has revealed they covered a combined distance of 410km, with walking, jogging, and running.

An analysis of KINEXON performance data carried out by FITGOOD PRO physiotherapist María Müller-Thyssen for the EHF showed that on average, each referee covered a distance of 4.5km per match at the EHF EURO. 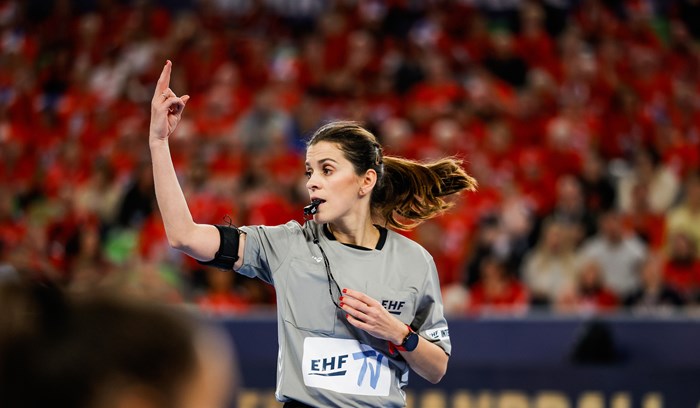 The average perceived effort per referee was "sort of hard", with the group rating their mental effort as 4.2 out of 10 and physical effort as 4.6 out of 10.

Müller-Thyssen said the data would build understanding of the physical demands on referees, allowing training plans to better prepare them for their roles. Although referees spend a minority of their time sprinting or running, this was where the majority of injuries occur and it was necessary for referees to focus their training in these areas to tolerate them better, Müller-Thyssen added.

Next Article Newbies in Europe looking for experience

The series of EHF Activities Webinar re-starts in 2023 with a true highlight: Talant Dujshebaev will present his ideas on the integration an…

BUSINESS REPORT: The EHF looks back at 2022 and a range of new developments in European Handball in the annual business report

NEWS: Over 130 participants are attending the Women’s Handball Conference on the fringe of the final weekend of the EHF EURO 2022

NEWS: Teams from across Europe, plus India and Pakistan, will participate in the 2022 World & European Wheelchair Handball Championship

FEATURE: Referees for the Women’s EHF EURO 2022 are ensuring they are eating and drinking all the right things after meeting nutritionist Ei…

NEWS: The 16th Conference of Presidents and the 15th Extraordinary Congress took place in Luxembourg on Saturday